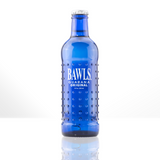 BAWLS Guarana is the flagship concoction of the BAWLS family. What does it taste like? It tastes like BAWLS! (Some say it tastes like an über-smooth crème soda, but we remain firm in our assertion that BAWLS is the only way to describe it.) It's no big deal, really. It's just epic deliciousness in a devilishly stylish cobalt blue bottles, infused with enough caffeinated guarana guts to send you into the stratosphere, with no crash afterward. That's all.

Tastes like 2004, baby! Fantastic product. I start my day with a couple of these bad boys. Gets me pumped right up. The bottles taste superior to the cans, but when isn't that the case? Cans of course have their own benefits. A 16 oz can cost the same as a 10 oz bottle. Cans are also easier to transport. Two cans is 32oz, three bottles is 30oz. With cans you don't have to lug as many containers around, and they don't make that loud glass clinking sound, nor do they break as easily. But the bottled Bawls goes down so much smoother...and look. When I say the bottled Bawls tastes like 2004, I ain't joking. You'll drink a bottle and you'll LAN Halo 2, or you'll go out paintballing with the lads. Sometimes you'll feel like baseball is great again. For sure, one of the best soft drinks on the market.

So I drank at least 1 energy drink every day. I usually drank Red bull flavored something just not the original as I don't really care for it. I've tried about every energy drink on the market today. Bawls is in my top 3 for energy and flavor. This original is probably the best original tasting out of all energy drinks out. I personally try to put in the freezer for maybe 10 -20 mins to give it that extra coldness with a little bit of fine ice and man that just takes it to another level. Now as far as bottles vs cans. Well there's a difference of taste. I prefer the bottles for sure but you do get a tad more from the cans however to me it's not worth the lost of flavor. I would still say it's somewhat like beer cans to bottles. Bottles to me just have that extra goodness that you can't get from the can at least in Bawls. I will say that they all get pretty close to the same taste but not quite. As far as energy well I think that it'll very from person to person but when I first started ever drinking Bawls they had me rocking. Now that I drink an energy drink everyday it doesn't have the same effect which that I could say is for most things you do daily. I highly recommend Bawls and that you really couldn't go wrong with any of there flavors. I personally enjoy the Ginger ale and Original the best. I been drinking Bawls off and on for every bit off 10 plus years. It's also nice to see that they seem to be offering free shipping promos occasionally. Which that's probably the only negative about buying from the site. Is that shipping without a promo code is a little pricey. I would like to see Bawls offer free shipping over $50 at least.

$52.00
BAWLS Guarana is the flagship concoction of the BAWLS family. What does it taste like? It tastes like BAWLS! (Some say it tastes like an über-smooth crème soda, but we remain firm in our assertion...

$30.00
Now available as a 12 pack, BAWLS Guarana is the flagship concoction of the BAWLS family. What does it taste like? It tastes like BAWLS! (Some say it tastes like an über-smooth crème soda, but we...
Add to Basket
Add to Basket

$52.00
BAWLS Cherry Cola is the 7th incredible flavor added to the BAWLS Guarana lineup and finally completes the prophecy foretold by the ancient BAWLS council. This mixture of highly caffeinated premium...
USD